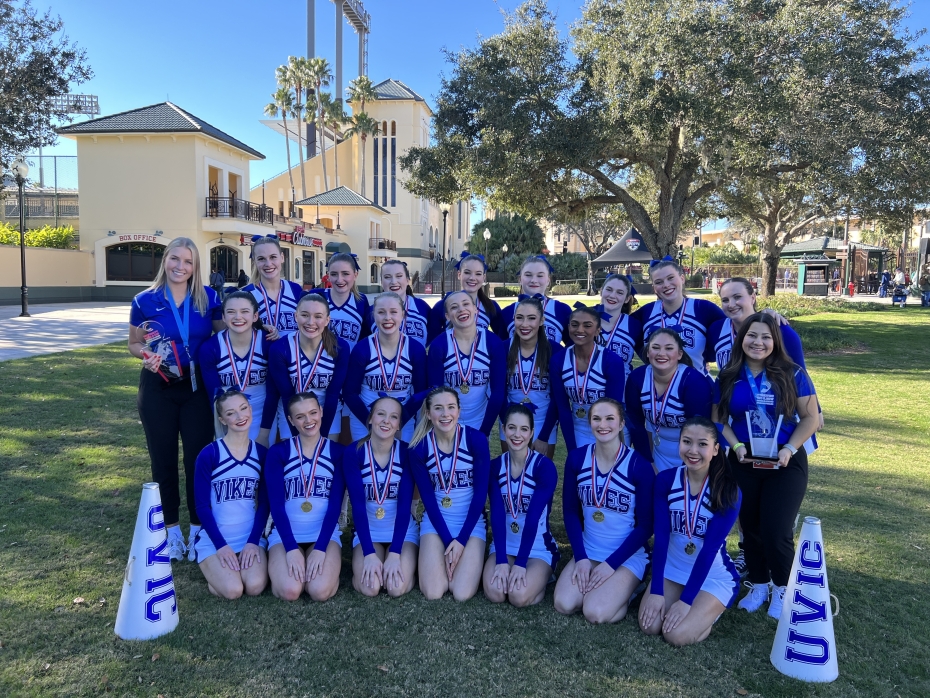 VICTORIA- It’s taken three years for the University of Victoria Vikes cheer team to make their long-awaited return to Orlando, Fl. for the ICU University World Cheer Championship, but it was worth the wait as the Vikes return home to Victoria as world champions.

Taking top spot among all teams in their division, the Vikes stole the show, also winning the Nations Cup, awarded to the highest-scoring team out of all 15 teams from across the globe. The Vikes participate in the premier all-girl team division, where they go up against squads from North America and internationally while competing on arguably one of the largest stages of any UVic team, varsity or club.

“To us, this win is a compilation of many, many years in the making, plus a team full of athletes who are willing to put in the work to bring it home paired with a sprinkle of what we like to call the Vikes way,” said Kate Bell, UVic team cheer head coach.

Undefeated in B.C. since 2017, the Vikes earned an at-large, fully paid-for bid to the 2021 world championships back in 2020 by winning the B.C. Sport Cheer (BCSC) Provincial Championship—the event was cancelled due to COVID-19.

After successfully re-applying and earning a bid for 2022, heartbreak struck once again. Not only did the trip get cancelled because of COVID-19 related restrictions, but they also had to earn a bid back for 2023, this time without funding from the International Cheer Union.

Undeterred, the Vikes returned to the competition stage last March, regaining their crown at the BCSC Provincial Championship and, once again, earning a spot in Orlando.

“To us, this win is a compilation of many, many years in the making, plus a team full of athletes who are willing to put in the work to bring it home paired with a sprinkle of what we like to call the Vikes way.”

With a chip on their very enthusiastic and cheerful shoulders, the Vikes knew that if they performed to the best of their ability and nailed their routine, 2023 could be their year to win it all.

“In the past, when we attended, our goal was just to put out a strong run and gain exposure to the sport we love. This season, we knew we had grown the program enough to be in a place where we would be strong contenders. This was so exciting for us,” said Bell, who has been with the program for 11 seasons.

“The team this year is extremely special and very talented. We have such a good group of girls who come to practice ready to work. They are adaptable and determined as well as really fun and silly.”

For Selena Krishna, who has been a member of the Vikes cheer team for three years, she says competing on the world stage was a dream come true and credits their victory to lots of hard work and dedication.

“Coming from Victoria and attending a competition where the top teams and athletes in this sport go to compete was such an honour. Our goal was to perform a routine that we felt proud of and knew we put our hearts and souls into,” said Krishna.

“The feeling of performing at this competition was indescribable. There was a mix of overwhelming excitement and nerves knowing that we were stepping onto the world’s floor to represent our university and Canada. I wholeheartedly can say that we could not be prouder to represent the University of Victoria and our country alongside several extremely talented Canadian teams who were also able to represent in such a positive way,” said Krishna.

The Vikes cheer team is part of the university competitive clubs program open to all eligible UVic students. Each year, upwards of 100 student-athletes try out for the team, and while the team's primary goal is competition, there is no cheer history or previous experience required. While the program welcomes anyone interested in competitive cheer to try out for the team, the dedicated group of athletes practice early mornings and late nights three days a week for 2.5 hours and attend varsity home games as well. They also fundraise year-round to help pay their way to larger competitions like the University World Cup Cheerleading Championship in Orlando.