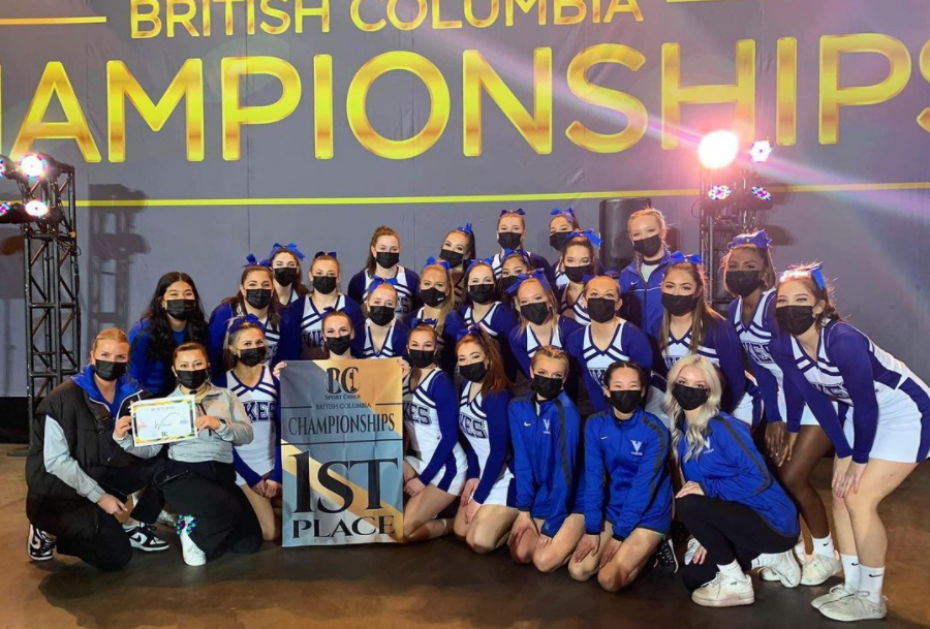 Undefeated since 2017, the University of Victoria Vikes cemented their spot as BC's top university cheerleading team by winning the BC Sport Cheer (BCSC) Provincial Championship in the University Premier All Girl category.

The Vikes not only swept the University Premier All Girl division, but they also earned the top score among all college teams and an at-large bid to the ICU University World Cup Championships in Orlando, Florida, taking place in January of 2023. The invitation to worlds is redemption for the Vikes who were heartbroken when they could not attend the event in 2021 due to travel restrictions.

The reigning provincial champion Vikes hadn't hit the competition floor since March of 2020, just weeks before COVID-19 put the world on pause. Despite the many challenges, the team, whose primary goal is to compete in the sport of cheer, worked extremely hard over the past couple of months using varsity basketball games as preparation for provincials by honing their skills in front of a crowd.

“The team came in rejuvenated, driven and totally bought into the process. Despite all the obstacles, this group is committed.”

"Due to the challenges of COVID, we didn't have a full team practice in the first semester, which made it difficult to practice our routine. Cheerleading is a sport where you really need everyone there to be able to practise the skills," said Vikes head coach Kate Bell, who is in her 10th season with the program.

We've had a great second semester, and we're so happy to pick things back up after two seasons away. The team came in rejuvenated, driven and totally bought into the process. Despite all the obstacles, this group is committed," continued Bell.

The standout Vikes showcased why they are the team to beat since 2017, putting together near-perfect performances at the BCSC Provincial Championships with a score of 135.40, 15 points ahead of the second-place Thompson Rivers University.

The Vikes cheer team is part of the university competitive clubs program open to all eligible UVic students. Each year, upwards of 100 student-athletes try out for the team, and while the team's primary goal is competition, there is no cheer history or previous experience required. While the program welcomes anyone interested in competitive cheer to try out for the team, the dedicated group of athletes practice early mornings three days a week for 2.5 hours and attend varsity home games as well. They also fundraise year-round to help pay their way to larger competitions like the world championships in Orlando.

Next up, the team will compete at the Sea to Sky International Cheerleading Championships on April 1-3 at the Vancouver Convention Centre.