UVic ultimate frisbee strives for equity, diversity, and inclusion while on route to national championships 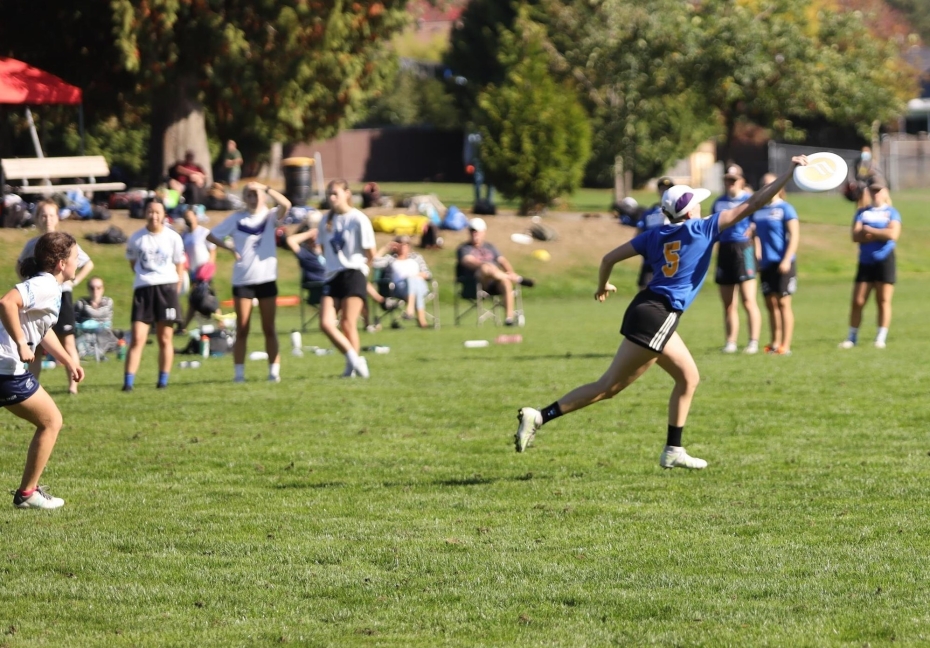 The University of Victoria women's and men's ultimate teams are heading to the Canadian University Ultimate Championships (CUUC) in Brampton, Ont. After defeating the UBC Thunderbirds at the western university championships for the first time in eight seasons, the women's team will look to showcase their hard work over the competition-less season. The men, who lost in the qualifier, have a more challenging road ahead and will battle it out for a spot in the top pool.

Commitment drives the success of one of UVic's most accomplished and inclusive athletic programs you've maybe never heard of.

Sure, the Vikes ultimate frisbee program isn't a varsity program, but you wouldn't know that from their rigorous training schedule. With three formal practices a week, plus dryland training, weight training, chalk talks and tournaments, the hours are intense, and dedication is a must—but everyone is welcome.

According to fourth-year captain Monica Devonshire, it's about more than just competition and team success; the program hopes to raise awareness about the sport of ultimate and increase participation across the board.

“We're incredibly grateful to have the opportunity to play in these competitive tournaments and all credit goes to our alumni. If it weren't for the strong foundation that they worked so hard to lay, we wouldn't be in this position...”

Who is Vikes Ultimate?

Vikes ultimate is a student-led program that competes in both the CUUC and the USA Ultimate (USAU) College Series, which takes place in the spring. The CUUC brings university teams from across the country to compete in the open & the women's division.

The Vikes are highly competitive and athletes train year-round to make the travel roster and compete nationally and internationally. This year there are around 40 student-athletes on the women's team and 35 on the men's roster, while 20 of those spots get to travel. Travel roster selection is based on several factors including skill, attendance, commitment, effort, improvement, willingness to learn and spirit of the game.

Despite striving to be the best in the sport, the ultimate community is deeply rooted in fair play and inclusivity. The Vikes are active community members, hosting clinics for youth and encouraging kids to get active. They also partner with Ultimate Spirit, working to bring Indigenous communities and Indigenous youth to campus.

For those unfamiliar with it, ultimate is a game where players try to catch a disc in the opposing team's end zone to score a point. Players can't move with the disc, and the disc can't touch the ground. In practice, ultimate looks like a mashup of football and soccer— all with nothing more than a disc. The barrier to entry is low, and the community not only welcomes but encourages participation from anyone and everyone.

Veterans Alicia Brolly, Monica Devonshire, Taryn Webster, and Mackenzie Dawson captain the women's team. Leading the men's squad are Keegan Freeland, Jonah Thiele, Joel Lepper and Justin Pettenuzzo. The coaches this season are program Amira Maddison on the women's side, and Vikes alumni Oliver Telfer for the men. Together, the team captains and coaches not only help select the team, but they take care of scheduling, training, team culture and making sure that athletes stay on top of their studies.

The Vikes ultimate program is heavily tied to it's alumni community who've built a strong foundation for which the program continues to operate. The alumni are very active and remain closely connected to the current team, including traveling to games to cheer on their alma mater.

"We're incredibly grateful to have the opportunity to play in these competitive tournaments and all credit goes to our alumni. If it weren't for the strong foundation that they worked so hard to lay, we wouldn't be in this position," said Dawson.

It's clear when talking to any of the captains, beyond the close-knit community, what really makes the sport unique is its founding principle: Spirit of the Game (SOTG).

Spirit of the game

A truly unique and defining element of ultimate, SOTG places the responsibility of fair play solely on the athletes themselves by requiring each player to know the rules and make their own calls without the help of a neutral official. Highly competitive play is encouraged, but never at the expense of mutual respect among competitors, adherence to the agreed-upon rules, or the basic joy of play.

SOTG is unique to the sport but also provides a potential inroad for bias. Because of the potential for bias, athletes are encouraged to question how they interpret the actions of others (e.g. when deciding spirit scores), to examine their expectations of "mutual respect among competitors" to be more inclusive, and to use SOTG practices and procedures as a means for enhancing understanding of cultural differences.

Gaining momentum over the last decade, ultimate will debut as a demonstration sport in the 2028 summer Olympic Games in Los Angeles. By getting into the Olympics, the sport hopes to bring light to its highest priority objectives: growth, gender equity, inclusiveness, diversity, the promulgation of the values and attitude of Spirit of the Game, and a healthy lifestyle.

The UVic ultimate teams are a committed group of athletes with a true passion for promoting the progression of the sport. By getting as many people involved as possible and creating accessible and equitable playing opportunities, they're a shining example of health and wellness on campus.

The UVic ultimate teams will make their way across the country to compete Oct. 15-17. They are currently fundraising to help subsidize their travel costs.