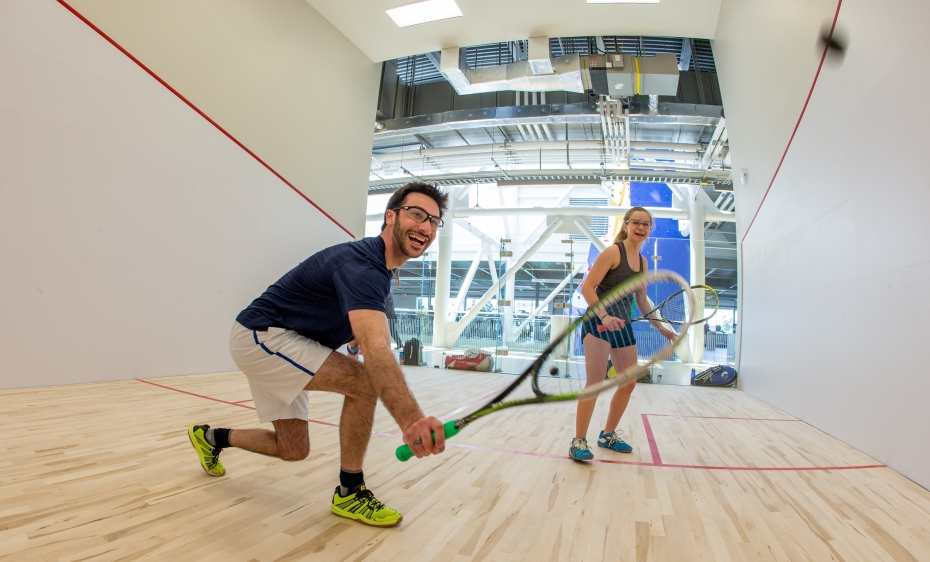 Squash is more than just a tasty fall accoutrement; it's also a highly accessible sport played by more than 20 million people worldwide in over 185 countries. Not only beginner-friendly, squash is also rated Forbes magazine's world's healthiest sport.

University campuses across the country are some of the best places to discover and try out the game. The University of Victoria is no exception. The Centre for Athletics, Recreation and Special Abilities (CARSA) boasts outstanding squash facilities accessible for all full-time students and staff with a campus ONECard. Students can also join the UVic squash club, open to anyone and everyone with no experience necessary.

While having access to a squash court is somewhat of a requirement, beyond that, there are minimal prerequisites for beginners to get started.

Squash is a racket and ball sport played by two players in a four-walled court with a small, hollow rubber ball. The players alternate striking the ball with their rackets onto the playable surfaces of the four walls of the court. It can be as easy or as challenging as the players make it.

For UVic squash club co-president Bethany Scholfield, a severe concussion ended her basketball career, leaving her searching for a safe activity to stay in shape. Scholfield's mom suggested racquet sports as an option, and while checking out UVic's campus clubs' day, she learned about the squash club and the rest is history.

Four years later, Scholfield, who is pursuing a degree in French, is now the club's co-president alongside Evan Wright. The two captains are organizing the Sixth Annual UVic Squash Open. The amateur competition is an all-ages event sanctioned by Squash BC that has grown over the years as a fun way to engage the UVic squash community, the local squash community, and even the junior squash community.

“Squash is such a supportive sport. It's so much more than a game; it's a community. It's really social, and everyone is so welcoming and helpful—I've made so many great friends through the sport.”

What makes the event so unique is that it's open to players of all-ages and skill levels (A, B, C, D and open/pro) and usually draws between 90-100 players made up of UVic squash club members, junior players from St. Michaels University School, and a large contingent of community and BC squash enthusiasts.

"Squash is such a supportive sport. It's so much more than a game; it's a community. It's really social, and everyone is so welcoming and helpful—I've made so many great friends through the sport," said Sholfield.

Integral to the growth of the UVic Squash Open is Scott MacInnis, a member of the BC Jesters Club, a group dedicated to promoting squash and racquet sports through schools, universities, small communities and other clubs. A 40-year veteran of the sport, MacInnis has seen the growth of the sport ebb and flow over the years. With almost 20 junior players participating in the UVic Squash Open this year, MacInnis says that the growth of the junior game in Victoria is the best it's ever been and that the university setting is one of the best places to get started.

MacInnis, whose passion for the game runs deep, helps promote and fundraise for the UVic Squash Open, providing funding and prizes to support the event offer a suite of events to get more people out and involved.

Most years, the event hosts an open/pro draw which brings in the province's top players, but because of a conflict with a major tournament in Vancouver, the open draw will resume next year. There will, however be an opportunity to watch some of the elites put on a show with a few exhibition games.

"The UVic Squash Open is a really great event. I've been involved since its inception and it's just a great way to get the community together and get some eyes on the sport," said MacInnis. "It's too bad there is no Open division this year because getting to see those athletes in action is motivating for people. We'll be back in full swing next year, though."

Never played squash before? That's okay too. The event is all about having fun and exposing people to a great sport and a great community—not to mention the opportunity to win some cool prizes.

Everyone is guaranteed a minimum of three games and will walk away with a pair of Vikes squash socks.

Not ready to test your skills in a tournament just yet? That's okay too. Come watch and see what it's all about.