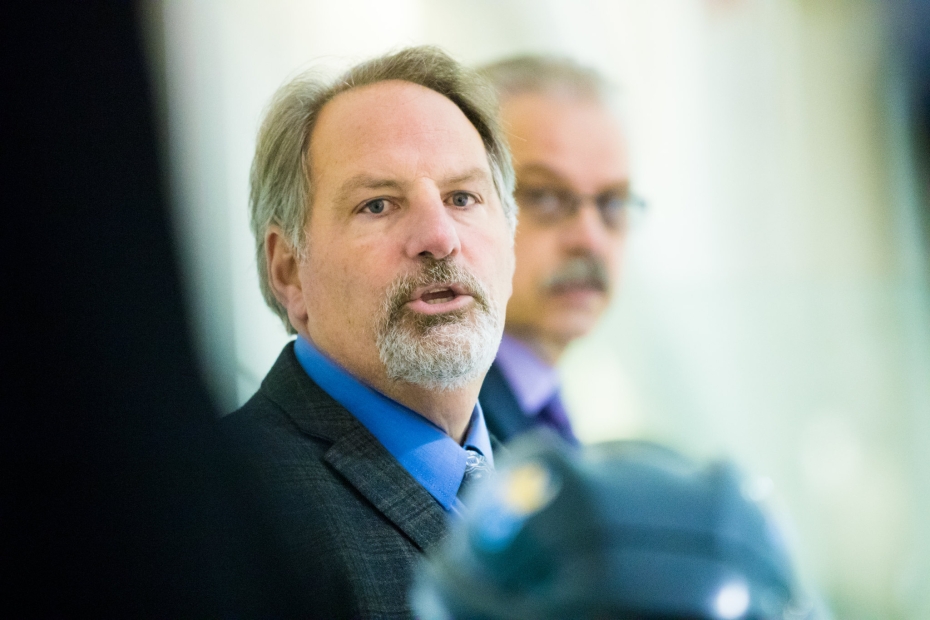 Victoria – The name Harry Schamhart is synonymous with University of Victoria hockey and now, thanks to a newly endowed scholarship, the long-time volunteer coach and current general manager’s legacy will live on for years to come through deserving UVic hockey players.

“This new award is about coming together to recognize Harry, the tremendous amount of work and the thousands of hours he has contributed to the program and our players,” said Jason Wright, UVic programmer for clubs, racquet sports and martial arts.

Around since the 1960’s, the UVic hockey program has seen various iterations over the years. Re-established by Schamhart in 2005, the modern competitive club team is a founding member of the British Columbia Inter-Collegiate Hockey League (BCIHL). Instrumental in the creation of the BCIHL, Schamhart wanted to provide a venue for lower cost, competitive, high-calibre hockey for players beyond their junior hockey careers right here at UVic.

In 2015, a group of UVic hockey alumni came together to raise an initial $12,000 to kick-start the fundraising process while working towards an endowment in Schamhart’s name. When the pandemic hit, progress stalled but kicked back up again in late 2021, thanks to a dedicated group of alumni and supporters.

A final push for alum and community support carried the award across the finish line in 2022, solidifying an endowment that will support a $1,000 annual scholarship for a student-athlete to continue the tradition of hockey excellence at UVic.

For UVic men’s hockey alumnus Dustin Taylor, because of his experience with the UVic hockey team, he says he will continue to give back to the program knowing the many tangible and intangible benefits student-athletes gain from the program.

“Not having varsity status means that there are limited resources for the team, making it truly challenging from an operational side. I cherished my time with the Vikes and continue to support the team as an alumnus and encourage others to as well,” said Taylor.

And like many others over the years, for Taylor, it’s because of coaches like Schamhart, who has given his time, energy and money to see young people succeed, not only in hockey but in their lives.

“To this day, when anyone asks who my favourite coach of all time was, I always say Harry Schamhart. To have a full-time job and cycle his energy and efforts into putting a team together is just incredible. Despite having few resources, he used his network to put something together and willed his way into making things work,” continued Taylor.

“For him to have this award named after him is truly his legacy, hopefully in perpetuity.”

This new scholarship will help keep the tradition of excellence alive by giving the next generation of student-athletes the ability to play high-level university hockey at UVic. The award will be given out for the first time in 2023.

The men’s hockey team play their first regular season home game of the season this Friday, Oct. 21, at 7:30 p.m. at the Ian Stewart Complex. It’s Vikes Nation’s UVic Hockey Night and tickets are sold out! Follow these links for information on the Vikes Hockey team or the BCIHL.

This award has successfully reached endowment. Top up gifts are gratefully accepted here.