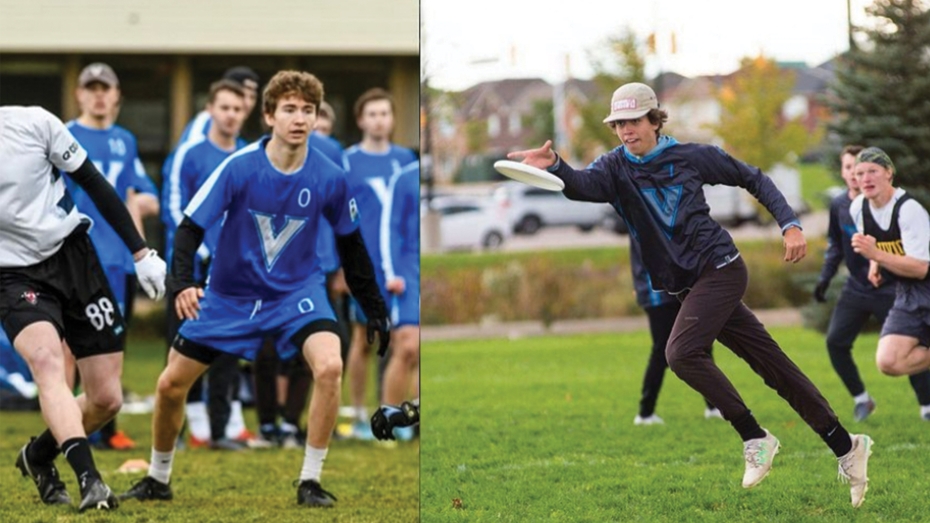 VICTORIA – Representing Canada is the goal of many collegiate athletes, and while that goal often goes unrealized, for University of Victoria Vikes ultimate frisbee teammates Max Pettenuzzo and Ben Baird, it seemed almost inevitable.

Selected to Canada's U20 ultimate team, Pettenuzzo and Baird will represent Vancouver Island in Wroclaw, Poland, this summer at the World Junior Ultimate Championships from August 6-13.

For Pettenuzzo, ultimate is in his blood. His parents, two-time world champions, were members of the Canadian national ultimate team that brought home world titles in the mixed division. Pettenuzzo is a third generation Vike, his father Dave, a founding member of the Victoria Ultimate Players Society, played for the UVic men’s ultimate team. Older brother Justin is a current team captain and a two-time world junior team member.

Playing on his first ultimate team at Willows Elementary School in Grade 4, Pettenuzzo is somewhat of a veteran. Although he played various sports growing up, including soccer and basketball, he says ultimate is the perfect mix. "It's like a mix of handball and football, but with less contact, which is nice from an injury perspective. I really like the jumping and diving aspects of the game."

Playing ultimate through middle and high school, it has long been a dream to play for the national team. While trying out for the U20 squad in Vancouver in early May, the first-year Vike leaned into his older brother's advice, who played for the same team in 2018.

"My brother received this advice from a World Games athlete when he made the team and passed it on to me, 'be good at what you're good at and be unnoticeable at what you're bad at," said Pettenuzo.

That's exactly what he did, showing off his defensive prowess, body control and incredible hops. At just 5'8", Pettenuzzo won the sky battle, where athletes battle it out in the air to catch a flying disc at its highest point. During the sky battle, Pettenuzzo caught the coach’s attention with his athletic abilities, but teammate Baird caught their eye for being 'Max's hype man' and the type of supportive cast member every team needs.

Unlike Pettenuzzo, who was practically born with a disc in his hand, Baird's intro to the sport came later.

Born in Victoria, Baird shared his youth between Victoria, Thailand (his mother's home country), and Maddison, Wisconsin, where his father worked at the University of Wisconsin.

After spending Grade 8 in Thailand, Baird returned to Maddison to find all his friends had joined the school's ultimate team. As it turns out, that year made a difference, and while his pals all made the junior varsity and varsity teams, Baird was relegated to the C-team.

Nonetheless, Baird fell in love with the sport and, in true underdog fashion, dedicated the entire summer, which he spent in Victoria, to improving his skills in hopes of making junior varsity.

"I gained a passion for the sport and felt I had a lot of people to prove wrong. When I wasn't working, I would run sprints alone and throw every day. I would get 50 discs and just throw them to no one. I would join in on pick-up games wherever I could," said Baird.

"The Victoria ultimate community is very inviting, especially for younger athletes, so they always welcomed me to join in."

Returning to Wisconsin for Grade 10, Baird not only got selected to varsity, but he was also the youngest member on the team that went on to win the Wisconsin State Ultimate Championships. Since that time, Baird has dedicated himself to the sport with the goals of playing for a university team and eventually representing Canada.

Now a member of Team Canada's U20 roster, it was a combination of his technical skills and positive attitude that Baird believes set him apart. You could say Baird is the 'ultimate' teammate.

"This year, I fell in love with the Vikes team—everything I do, I do for the team," said Baird. "I've been training for four years to hopefully make the national team; I had one tryout to give it my all, I did that, and I'm so happy with the result."

Pettenuzzo and Baird will spend the next few weeks training on the Island before heading to Vancouver and then Ottawa for training camps. The team then will make its way to Wroclaw to compete against the world's best national teams for junior under-20 players.

Baird is currently fundraising to help support the trip, check out his GoFundMe page here.