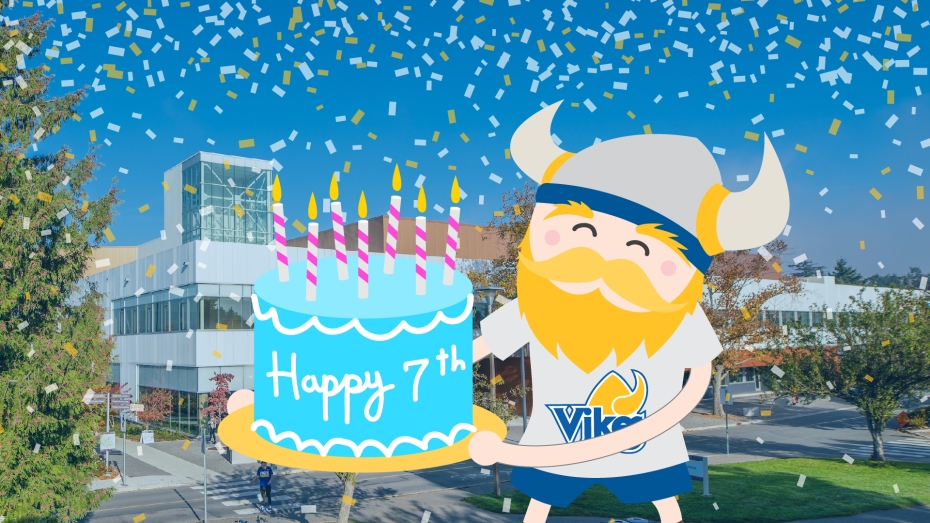 May 2015 marked the official grand opening of the Centre for Athletics and Special Abilities (CARSA), a 190,000 square foot facility part of a campus-wide strategic response to the needs of UVic's growing student population. CARSA also houses CanAssist, a program that develops technologies, programs and services that help people with special abilities improve their quality of life.

The building's architecture is intended to engender a sense of pride in the university and promote UVic's connection to our diverse community. Inclusion, innovation, participation, identity, responsibility, accessibility, and legacy are all values inspired and expressed by the overall design.

It's now been seven years since CARSA's doors opened and there is a lot to celebrate, while noting there are endless opportunities for growth, change and innovation moving forward.

To celebrate seven years of CARSA, let's look back.

A vision that started in 2008 and broke ground in 2013 comes to life at the CARSA grand opening in May.

Just one month into 2016, the Department of Athletics and Recreation (ATRS) announce three major partnerships with the naming of CARSA's RBC Blue and Gold Room, the UVic Alumni Association Spirit Section and the Ian and Gillian Stewart Varsity Weight Room.

Soon after, the Gwynne Studio is unveiled following a generous contribution from Linnea Turnquist and her family to help support healthy living in Victoria and reinforce UVic's commitment to well-being, active lifestyles, inclusiveness, and mental health.

CARSA becomes Gold Certified in Leadership in Energy and Environmental Design (LEED), a standard set by UVic in its commitment to creating and maintaining a green campus and providing leadership and action on climate change and sustainability.

CARSA participates in the OneAbility ProMotion Week with an open house dedicated to education about free inclusive fitness and sports as well as the importance of incorporating inclusive values into programming.

Following the tremendous success of hosting a week-long NBA training camp and intra-squad scrimmage for the Toronto Raptors, CARSA sees professional action once again. NBA All-Star DeMar DeRozan returns to the CARSA Performance Gym to host his youth basketball camp in August drawing young athletes from the community and beyond to the UVic campus.

CARSA hosts another major sporting event with the eight team NCAA Victoria Invitational women's basketball tournament bringing the best of women's college basketball to campus along with thousands of fans. The event is a big win for the Greater Victoria business community, as well as UVic's global engagement agenda.

With the onset of the pandemic, CARSA closed its doors to patrons in March of 2020. In an effort to continue providing service to the community, ATRS launches Vikes at home, bringing CARSA fitness programs, Vikes Nation events and outdoor education courses to members virtually.

Set to act as a venue for Victoria's We the West Festival, plans are in place for CARSA to host an Indigenous basketball tournament as well as a wheelchair basketball tournament. Due to continued COVID-19 restrictions the event is cancelled with hopes to return in the future.

Later that summer, CARSA hosts some of the word's best international basketball stars serving as a practice facility ahead of the FIBA Olympic Qualifying Tournament (OQT) held in Victoria.

After a couple of difficult years facing pandemic limitations, CARSA reopens at full capacity and looks to host a number of major sporting events in the fall, including the U SPORTS Women's Rugby National Championships and the BC 55+ Games.

Along with the university, ATRS at UVic is striving to create sports and recreation experiences that challenge or remove conventions that marginalize or limit the opportunities for individuals to participate. While much has been done to improve physical accessibility, a lot can still be done to improve inclusivity. Through education and evaluation, the department is making changes to programs, policies, and culture to establish a more inclusive CARSA experience.

Starting with inclusive signage, ATRS is dedicated to improving access and communication around gender identity and expression, race, culture, and ethnic diversity.

With a goal of offering more inclusive events and programs, at just seven years of age, CARSA is still in its infancy and will continue to grow and improve for years to come.

Happy birthday CARSA; here is to many more.